If you’re anything like me, Sunday nights can get a little chaotic.  Laundry needs to be folded, those two dirty dishes seemed to have multiplied into twenty overnight, and juusttt as you’re about to hop into bed, the pup has mustered enough energy to spend the next 30 minutes running around the house in a fit of “zoomies.”  Chaos is all relative, though, when you’re Lindsay Lohan.

Just four days after resurfacing from her sixth rehab stint, LiLo sat down with the talk show queen for Oprah’s Next Chapter special which aired last night.  Now, sitting down with Oprah as a general rule is a brave move.  These “tell-all casual conversations” can usually go one of 2 ways for celebs: a triumphant comeback complete with a spot on some best-dressed list and a new ad campaign for a product they only ever seem to use as a result of that silly contract thing OR it can be a complete social slaying a la Lance Armstrong and that whole Tom Cruise couch incident.

For me, this segment showcased the best Lindsay Hollywood has seen in years.

Or how about this lovely treasure? 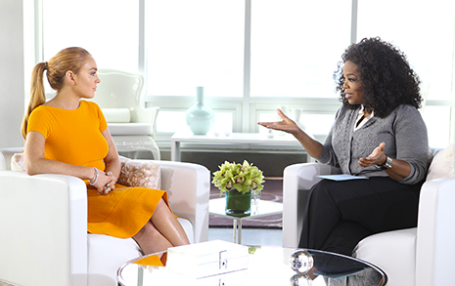 The fashionista in me just wants to say a few things about her appearance – First, can I just give a quick standing O for not having to witness those ridiculous, inflated, fish-like lips she’s been sporting due to excessive filler injections?  Not sure who said having a swollen face was cute, but I’m glad that she’s at least approaching normal proportions at this point.  Second, a slicked back pony was such a great choice.  At last, we can see the fresh, freckled, face we’ve been longing for since The Parent Trap (I’d be okay with bringing back the English accent, too, but then we may have some schizophrenic issues to deal with so…)

Finally, the body-hugging Alessandro Dell’Acqua dress.  Now at first glance, I was plagued with the irony of it being orange and her having served jail time.  But once I got over that, I did appreciate the modesty of it seeing as it was Oprah and she was there to look “put-together.”  Not sure about those polka dot pumps, though (sorry, Oscar de la Renta <3) .  The outfit as a whole seems to be fitting,… it’s like it’s predicting the future by saying “I’m on the right track, but I’m still a little nutty.”

Back to the interview – Lilo’s demeanor was calm and unassuming – not erratic like we’ve seen previously.  She also was extremely candid on her addiction, claiming alcohol was her drug of choice but, that she also dabbled in cocaine use.  No surprises here.  Another notable topic was her time behind bars – she said that she “kind of wanted to go to jail” and that she basically craved chaos.   Let’s face it, whatever she says or does is going to be heavily scrutinized – hello, she’s a celebrity, its kind of what she signed up for.   I’m hoping she stays sober and continues to better herself because at the end of the day, there’s always Amanda Bynes.

Fresh Mother’s Day blooms🌿 Happy early Mother’s Day to all the amazing mums out there 💗
One down, forever to go. Happy birthday, my love.💗
Remembering that one time I went to West Palm Beach and was v. v. impressed with this palm tree aesthetic. 🌴
This is me pretending to be on vacation. If you need me, call me on my shell🐚😂 #sopunny • • • Swim deets: @cupshe, under $30, @amazonfashion & linked on my Amazon shop (in bio), SO CUTE.
My inner six year old is totally loving the pearl barrette trend happening here. I recently ordered 5 (Yes, FIVE!) for less than $8 off of @amazonfashion I’ll share the other styles on my stories tonight, but I linked them on my Amazon Storefront through the link in my bio! Head on over to the dress me up section if you’re feeling fancy😂😘
Saturday’s are for coffee and egg sandwiches. 🍳
Never letting you go💗
Guys, hi. Comin’ at you live from a conference room, so let’s conference.😆 • • Unsung heros: $6.49 cell phone case and random office mirror. You da real MVPs.

Tweeting One Trend At A Time